VIEW OF THE MONTH NEWSLETTER

We hope you enjoyed a well-deserved break over the Easter Weekend, spending quality time with your family and loved ones. We thought Good Friday should have been called Great Friday this year. Not just for the obvious reasons but also because there were so many positive developments with regards to South Africa’s reforms during the month of March’21. Below we mention just a few:

In this month’s newsletter we cover the following topics:

We are continuing from our previous newsletter (February’21 View of the Month) where we compared the projected outcome of contributing towards Retirement Annuity (RA) with Offshore investing. As a reminder, our research revealed that the after-tax returns in an RA were better compared to Offshore investing, despite the restrictions related to Regulation 28 of the pension fund act (which only allows 30% offshore exposure) and the poor South African market performance over the last 5 years.

Based on the outcome of our research, we were expecting more questions from our readers relating to RAs. But no, in true South African style, the most questions raised were related to Offshore investing. As a result, we thought we will dive a bit deeper into Offshore investing in this month’s newsletter, especially tax concepts not well known.

At its highest level, investors have a choice between direct or indirect offshore investing. Direct offshore investing is where an investor “physically” takes money offshore for investing purposes. In other words, going through the South African Reserve Bank’s (SARB) exchange control process, converting Rands (ZAR) to for example US Dollars (USD) and then investing the USD in another country (for example by buying the S&P 500 exchange-traded fund on the New York Stock Exchange).

Indirect offshore investing is where an investor invests locally in a Rand-denominated offshore investment without having to convert and taking money “physically” offshore (for example buying the Satrix S&P 500 ETF on the JSE). This type of investing does not require SARB approval or going through the exchange control process.

Tip 1 – Gains or losses from currency fluctuations can impact your tax liability
In theory, the after-tax returns for direct or indirect offshore investing should be the same with potentially only a difference in cost. That is unfortunately not true as there is a difference in the method used to calculate the capital gain or loss for the direct and indirect investing.

The significant difference between the methods arise because the simple method effectively uplifts the base cost to the depreciated ZAR exchange rate at the time of the disposal, which eliminates currency depreciation from the capital gain. The converse would however also be true: the simple method is likely to be at a disadvantage when the ZAR appreciates.

Tip 2 – There are offshore structures that provides tax efficiency for investors
South African investors wanting to invest directly offshore can make use of a global life plan or portfolio, which is an offshore investment structure issued by South African life companies. Global life plans are taxed according to what is known as the “five-fund approach”. The five funds refer to separate policyholder funds according to the nature of the plan owners: individuals, companies, retirement funds, and those that are not taxed (such as public benefit organisations and churches). Each policyholder fund is taxed differently.

For individuals, life assurers pay tax at 30% on all income in the policy. This means an individual’s effective capital gains tax rate in a global life plan is 12% compared to 18% for high income earners affected by the 45% tax bracket in SA. There is no additional benefit for dividend tax, which is withheld at 20%.

Another tax benefit of a global life plan is that the tax administration (calculation, collection, and payment to SARS) is taken care of by the life company, that makes the tax reporting process much simpler. Proceeds from disposing of an offshore investment are generally tax free in the hands of the investor.

It is important to remember that a global life plan is just a “wrapper” and the underlying investments are still Unit Trusts (UTs), Share/ETF portfolios or Capital protected structured products.

Globally, economic recovery is slow, and the World Bank continues to reiterate this, highlighting that “although global economic output is recovering from the collapse triggered by COVID-19, it will remain below pre-pandemic trends for a prolonged period.” The IMF adds that the “world faces severe problems of debt sustainability in the wake of the coronavirus crisis that have not been properly understood or addressed, which threaten to tip developing countries into a rising wave of hunger, poverty, social unrest and conflict.” The fact that only six countries have defaulted on their foreign debts last year — Argentina, Belize, Ecuador, Lebanon, Suriname and Zambia — has created the illusion of stability and a misperception of the seriousness of the situation. Some countries are immunising their populations rapidly against Covid, but the pandemic is sweeping through others again, especially in India, Brazil and parts of the EU. The broad direction of travel is still one of optimism over world growth in 2021, as markets eye a gradual easing of restrictions.

South Africa’s economic data continues to show that businesses are not resilient during the lockdown restrictions, and are overly sensitive to rising levels of lockdowns, as are consumers themselves, with the economy’s production still well below the first quarter of last year. Growth in household consumption expenditure, which comprises around 60% of GDP is likely to be modest in the medium term, as consumers, already financially constrained before the onset of the pandemic, continue to face a degree of financial uncertainty.
Government’s stringent lockdown restrictions, most pronounced during the second quarter of last year, forced many businesses to close their doors permanently or decrease their workforce complement. Indeed, the official unemployment rate rose to 32.5% in Q4.20. South Africa has one of the lowest labour absorption rates in the world, with youth unemployment staggeringly high, hovering above 60%.
Hinderance of economic activity, from further waves of infections, accompanied by tighter restrictions is anticipated until the vaccine is widely dispersed. Additionally, domestically, structural inefficiencies, political and policy uncertainty, fiscal risks, rising unemployment, and the slow implementation of crucial reforms continue to weigh on South Africa’s fragile economy

March saw President Biden sign his $1.9trn American Rescue Plan into law, adding to Donald Trump’s $900bn Covid Relief package in December’20. The total represents an unprecedented fiscal boost worth 13% of GDP. US President Joe Biden also revealed his US$2 trillion infrastructure plan on Thursday 31 March’21, which would also boost jobs and shift the country to renewable energy sources over the next eight years. The plan is the first of a two-part package designed to uplift the economy and communities. A second part, focusing on education and childcare, is set to be unveiled in the coming weeks. Investec expects growth for the US of 6% in 2021 and 4.8% in 2022.

Attention remains firmly focused on the race between the spread of the newer and more contagious strains of Covid-19 on one side and vaccinations on the other. So far, the pace of inoculations has been too slow to contain, let alone diminish, the incidence of the disease. As a result, social restrictions have been extended in several countries. This will hold back the economic recovery resulting in Investec reducing their growth forecast from 4.6% to 4.4% for 2021, and from 5.2% to 5.0% for 2022.

The UK’s economy has become more resilient to lockdowns as businesses and households have adapted to pandemic conditions. Monthly GDP for January’21 revealed that economic activity was more resilient than expected to the third national lockdown, contracting by 2.9% on the month, relative to a consensus forecast of -4.9%. Considering this information, Investec has upgraded their 2021 growth forecast to 7.3%.

China’s official PMIs surpassed expectations in March’21 as the economy accelerated following the Lunar New Year holiday in February. The manufacturing PMI was reported at 51.9, an increase from last month’s 50.6. The non-manufacturing PMI, which includes the construction and services sectors, also had a positive reading at 56.3 (a four-month high). This was boosted by new orders returning to growth at 55.9, as domestic demand continues to recover.

Due to the success of the S&P 500 Value Index Autocall in March’21, Investec will be issuing another tranche of the product in April’21.This tranche will however only be available in USD within your Glacier International investment account.

As a reminder, the investment has the following salient features:

The average USD to ZAR exchange rate for the month of March’21 was R14.97. South Africa is facing further credit rating downgrades, potentially on 7 May’21 from Moody’s, if not sooner from Fitch, risking the loss of its BB- rating, and so also risking marked Rand weakness and higher borrowing costs. S&P country review is on 21 May’21. Below Investec’s expected exchange rate forecasts as published towards the end of March’21:

As published in our previous newsletters, we have been trading oil in both our local and foreign share portfolios. Therefore, it was of great interest to us when the International Energy Association (IEA) came out during March’21 indicating that “global oil demand is set to rise every year through 2026” and that “Asia will continue to dominate growth in global oil demand, accounting for 90% of the increase between 2019 and 2026.”

Furthermore, they said that “by contrast, demand in many advanced economies, where vehicle ownership and oil use per capita are much higher, is not expected to return to pre-crisis levels as achieving an orderly transition away from oil is essential to these countries to meet climate goals”. However, this shift away from fossil fuels is likely to be longer-term in nature.

Below returns over the last 4 months of the two Exchange Traded Products (ETPs) used to get exposure to oil:

The Automobile Association (AA) says it expects a further hefty hike in fuel prices in April. The additional 27c added to the general fuel levy (GFL) and Road Accident Fund (RAF) levies announced by finance minister Tito Mboweni in February come into effect in April and will add costs to every litre of fuel purchased, in addition to the increased monthly adjustment.

Remember to fill up latest Tuesday 6 April’21 before the increase on Wednesday 7 April’21! 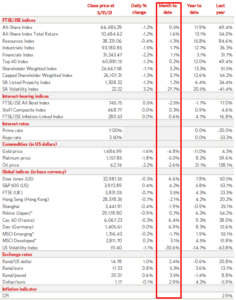